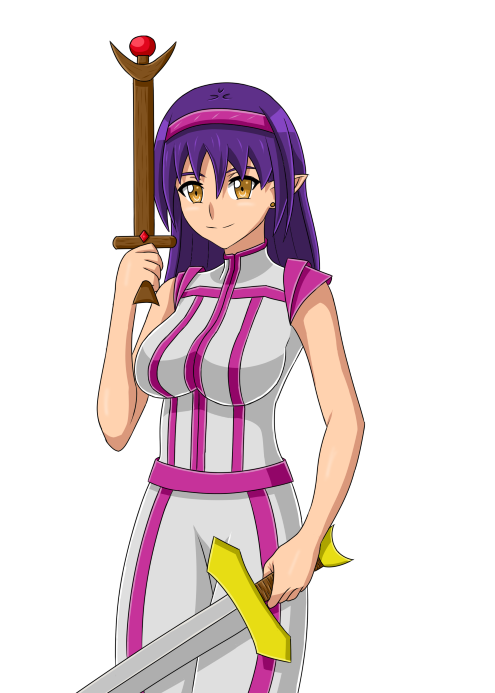 Alynna was born in Xianyo, the only daughter of a priestly family. For as long as she can remember, her older brother has been devoted to the Dictum Journey, a magical ritual involving prayer at five shrines designed to ensure the flow of magical energies between worlds.

One day there was a raid in Xianyo and she stood by her brother who was about to defend the village with some men. She waved her wand and cast spells for her life. However, she was no match for the battle-hardened bandits and was defeated. In an attempt to save his sister’s life, her brother was killed. After that fateful day, Alynna reproached herself endlessly. One day she could not bear the pain anymore and decided to leave her home and make a new start. Through her brother, she knew of a quiet village called Gliori near one of the Dictum shrines.

While recovering from the experience, she decides to continue her brother’s Dictum journey and honor him in this way. In Gliori, Alynna meets little Rina, whose outgoing and bright nature makes her change her mind and, in time, let go of the pain as best she can. Despite everything, she refuses her new best friend’s request that she be allowed to go along on the Dictum journey. Alynna’s fear is too great that something might happen to her. Over the next five years, however, she has been overcome by Rina’s eagerness and the two are ready for their first Dictum journey together.

No sooner have they set out than they are attacked by particularly aggressive slimes. Alynna hopes to reduce the aggressiveness of the slimes by performing the Dictum prayer and releasing the calming effects of it. Unfortunately, Rina cannot withstand the amount of slimes and the situation threatens to get out of control. Alynna asks the World Tree for help. At that moment, Valec appears and helps Rina get rid of the slime monsters.

Alynna is always dressed in the traditional priestess robe, carrying her staff and her brother’s sword. She is a very outgoing young lady who is completely devoted to the World Tree and is very conscientious about performing daily prayers. She expects the same conscientiousness from her fellow travelers. Valec and Rina are therefore regularly reprimanded by Alynna because they often act thoughtlessly. This behavior reminds her of her own, when she wanted to help her brother in his last battle. Furthermore, she pays close attention to manners and is the voice of reason. Often enough, she has to inform Valec and Rina of the importance of the Dictum journey. Although she gets annoyed with them from time to time, she loves them like her own family. She mentions from time to time that Valec reminds her a lot of her brother.